The Fun of Coding a Discord Bot

Hello, everyone! Today’s post is all to do with my Discord Bot and how I made it. If you haven’t already joined my Discord Server, a) You Should and b) you won’t have seen my Bot.

On the server, I have made a bot which can do a few fun things and fills in for my friend David. For example, typing /xkcd would show you the latest xkcd comic. You can also update Davvo’s game and eventually, I will be adding a /weather module for him. Now for a little guide on creating your own bot:

First of all, I will assume that you have a basic level of JS knowledge, and that you know how to use Discord.

You’ll then see a page like this with lots of useful information:

Go ahead and click Create a Bot User and then copy the token.

Now that you have a Bot setup on the website, you can go ahead and start your text editor and a terminal window.

First, create a folder for your bot where you can store all of your code and then cd into your bot’s directory (e.g. cd ~/Coding/Discord Bot). From there, you’ll want to type npm init to create your node package. Just hit enter through all prompts.

After that, you’ll need to grab the Discord.js module by doing npm install discord.js --save to get the package and save it to package.json. After that, we can create our files.

Create 2 files, 1 called settings.json and one called index.js. We’ll be putting all of the tokens etc in the JSON file and all of the functionality in the JS file.

in your settings.json, add the following:

After you’re done with that, save the file and open up index.js where you can copy and paste this code:

Once that’s all done, you’ll have a Discord bot that does… well… nothing… (yet).

So, it’s all well and good that you now have a working bot, but it doesn’t do anything! In this section we’ll cover some basic things you can do with your bot (you might want to open this to help you).

First of all, a ping. Where the code currently returns in the client.on("message"...)

Next, we want to add a response, so, for example, when the message is equal to "ping", we’ll want to send "pong".

This can be setup fairly easily with the usage of messsage.content = "ping" in an if statement. We then use the message.reply() method to reply and the result we get will look something like this:-

The previous section just covers 1 basic bit of functionality and the possibilities are virtually infinite. For example, you can add a dice roller fairly easily, by using the following code:-

I also coded an xkcd command to get the latest xkcd and display it nicely (you’ll need another node module called requestify which you can get by using the command npm install --save requestify):-

Thanks for reading my blog post on how to create a Discord bot. I hope you found it useful and informative. If you have any questions, Tweet me @charliebrittdev or have a look at the official discord.js site.

I’ve noticed that I haven’t been posting to the site much for a while which disappoints me because the whole idea of this site was to allow people to easily see what I was up to and this hasn’t been happening as I have liked. Since my last post about EURO 2 (which is here on YouTube), I have been up to a lot of things which I will briefly outline below.

In the morning of the Tuesday, we woke up to a broken hard drive :( which was not good at all. We were very chilly in the morning and so it was a welcome surprise when the sun came out. We spent the morning at the campsite and did some droning before we set off on a short journey to a place which was about an hour south of Cléuger.

We drove around for about an hour rejecting various campsites and aires before we arrived at an almost abandoned campsite (we were literally the only people there)! We then walked down to the beach which was less that 1km from the site and had a swim in the very cold sea.

After we were settled in at the site, we cooked up some ‘Lentielles’ and ‘Coq au Vin’ for dinner. We then got into bed for another reasonably cold evening.

On day 4 (a Tuesday), we woke up very cold and prepared for the journey to Jonzac (near where ‘Bampi’ lives). We stopped at Guérande City where we had galettes and bought some salt before we continued our journey for the long haul.

Finally, we arrived at Bampi’s house where we had a very lovely spaghetti bolognese and a nice bed to sleep in for the night. That concludes days 3 and 4 of our #Euro2 road trip and I will be updating you for days 5 and 6 soon.

So on friday night (7th April), my dad, my brother and I embarked on a journey of a lifetime. (Just kidding).

We set off on friday at about 5pm, ready to get to the port of newhaven for 11. We had McDonalds and prepared for the 3 hours of sleep which we’d be lucky to get on the ferry. At around 4 in the morning, we got off the ferry and drove for about an hour to a small Aire in the middle of nowhere where we managed to get another couple of hours sleep.

Once the sun had risen and the day was upon us, we set off on a very boring 8 hour journey to a small village called Landénevaac. We got very bored of the travels throughout the day and vowed to travel for only a few hours the next day.

At Landénevaac, we couldn’t find an open campsite so we decided to park in a little spot right by the sea. We had cassoulet for supper before getting a well earned night of rest. In the morning, we went for a walk along the seafront and came across a ‘feather tree’ which we thought was rather amusing.

We set off for a much shorter journey on the Sunday where we looked for a campsite and got some supplies from the local E.Leclerc. In the afternoon, we arrived at the campsite which was right by the sea and had a lovely view but was unfortunately a bit windy.

For dinner in the evening, we collected some lovely fresh oysters, of which there was a plentiful supply, and had some confit duck for our main meal. Then I edited the vlog before we went to bed and had a hot chocolate.

That was days (0), 1 & 2 of the trip. I hope you enjoyed reading it and will be reading the rest of the posts about our road trip.

Welcome to my post on Hacksoton! Today I will be giving you a summary of what I got up to at the Southampton coding event.

To start things off, we arrived promptly at 9:30 when the doors were due to open and were welcomed by all of the organisers who gave us our name badges and food cards. The food cards were completely free and could be exchanged for a bacon & egg roll (breakfast), a sandwich, some crisps and some fruit. Dinner was burritos (chicken, beef or veggie) which were all very tasty.

What did I get up to?

During the eight hours, I had a go at creating a reusable template for CHILLDNB and Chill Acoustic. I used an app called Sketch to design the website (as pictured below) and then used their mirror app to test it out on a phone/tablet.

After I had finished that, I got to work by downloading Jekyll and using a very minimal template. I started figuring out the arrangement of the html and once i’d done the hero section (the bit at the top), I began to set out the various styles for the css. 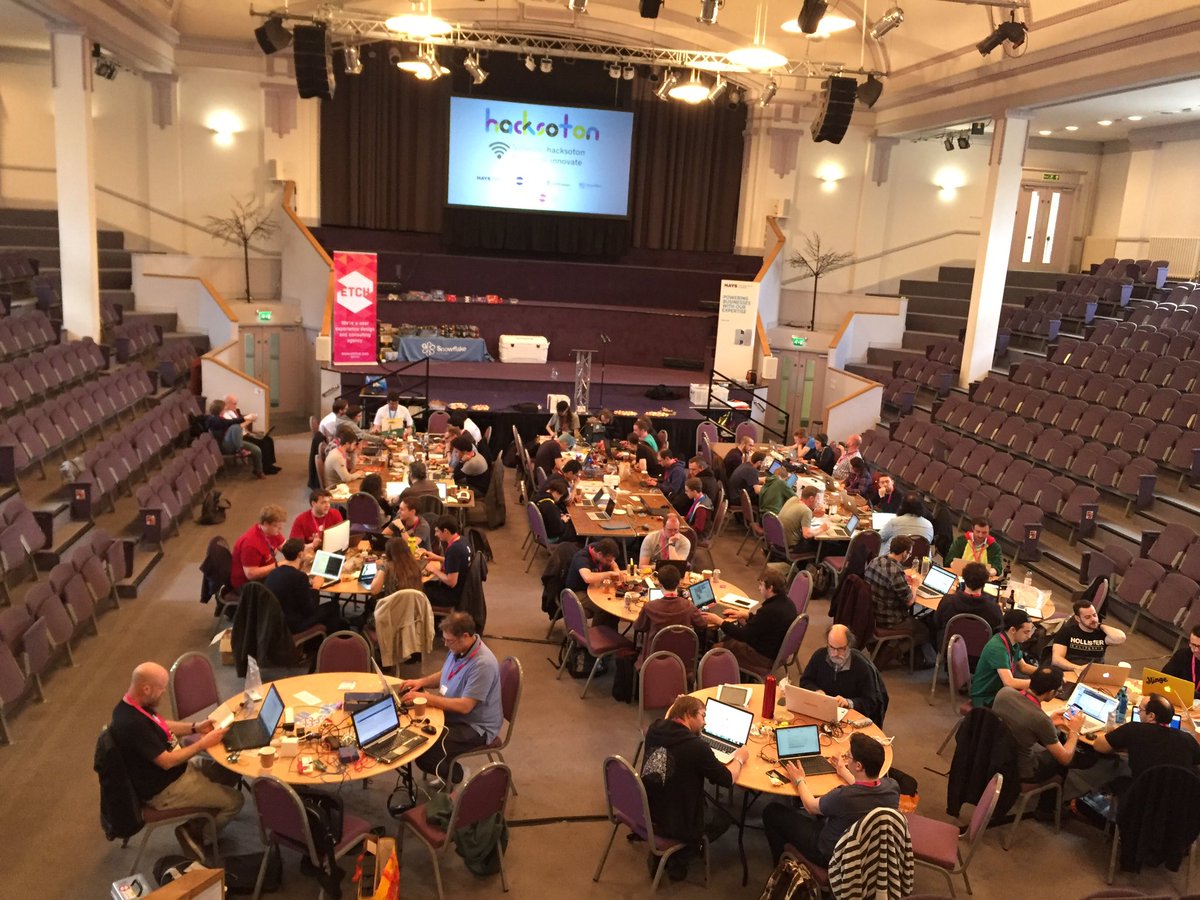 During the day, there was a kids area where they were doing some simpler projects & a presentation on modern javascript (which you can find here). At the end, there were presentations on what people got up to at the event, such as a fish that responds to music, something to make breakfast orders easier and a ‘dinosaur vision’ VR project.

They also gave away some Amazon Echo Dots and there was even an easter egg hunt which was pretty cool. There was refreshments and assistance available all day from many amazing developers. I’d like to say a huge thanks to all of the various sponsors/organisers (especially Etch).

Overall it was an amazing day which was super fun to be at (I will be coming back next year) but if there was one ever so slight criticism (it’s not really even a criticism) I could make, it would be that it would be nice to see a page where I could check out all of the code and projects made at Hacksoton on webpage or github repo somewhere.

Happy birthday to Adam and thank you for checking out my post!